Rocket cress can be used as an indicator crop 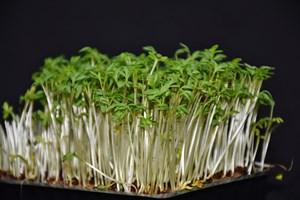 Greenhouses are supposed to create ideal circumstances for production of vegetables and flowers. But sometimes growers are surprised that crops do not really grow that well or even show damage. Toxic air can be one of the causes:

Rocket cress quickly indicates whether or not there are toxic substances in the greenhouse air. Mostly way before the tomatoes or other crops show traces of damage from toxic air.

How does it work?

If the rocket cress shows damage you know the air is suspicious. The next step is to find out which substance causes the damage. Please note that an incorrect nutrient solution or contaminated rock wool will also lead to damage to cress. Crop damage can also be caused by other things. Our colleagues at Hagelunie can inform you further about the use of this indicator.